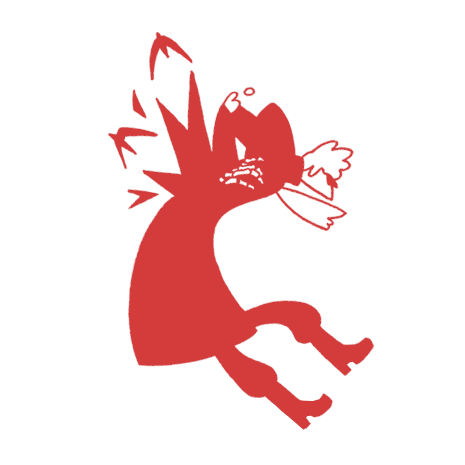 ‘Ludokinetic literature’ is a term I use to describe any literature that engages the reader in gameplay. This goes beyond being ‘interactive’ in the sense of being manipulable; it means imbuing the reader with a sense of responsibility, or implicating them in the outcome of the text.

There is no reliable rule as to how a text achieves this, or the extent to which such responsibility is illusory. Adventure gamebooks use branching narrative paths, some of which result in a ‘bad’ ending, to convince us that our reading decisions have dramatic consequences. A separate series of books, the Usborne Puzzle Adventures, confronts both reader and protagonist with an illustrated problem on every double-page, tasking the reader with solving it before they move forward in the story.

Both techniques are iterated and expanded extensively in the videogame medium, but also have relatives in poetry and literary fiction. Italo Calvino’s 1979 novel If on a Winter’s Night a Traveller has a ludokinetic quality in its early chapters by dint of its casting ‘You’ as the protagonist, and issuing instructions. Raymond Queneau is among those poets who have experimented with multiple-option poetry, his Un conte Ã  votre faÃ§on appearing in 1967, a decade before Choose Your Own Adventure founder R. A. Montgomery’s Sugar Cane Island.

In Choose Your Own Adventure and Fighting Fantasy titles, the act of turning the page is freighted with consequence.

The term ‘interactive fiction’ is widely used to account for ludokinetic stories. But what of ludokinetic poetry? This – and more generally, the crossover between games and poems – has been the subject of my interest for some years. Both videogames and poetry, at their best, exemplify G. K. Chestertonâs assertion that âthe largest wilderness looks larger seen through a windowâ. They imply vastness and depth within a confined space. Both combine a kind of fussy technicality with a prediliction for spellcraft, and both have a tactile appeal – games because their worlds respond to cybernetic interaction, poems because they emphasise the physical character of language. As such, they ask to be explored, rather than merely absorbed.

This is one understanding, at least. It is somewhat opposed to more popular interpretations: of poetry as reportage or as feat, and of games as amusements, or as tests of skill. These perspectives have their roots, I suspect, in an abiding attraction to magico-religious performance. The poet as seer or witness, the game as entertainment, the player as athlete – all of these facillitate a clean separation between audience and spectacle. This answers both the desire to be led, to be in thrall, and the ambitions of those who wish to perform and to be gazed upon.

The view of games and poems as sites of distributed responsibility, where the audience makes meaning for themselves through the effort of engagement, is a minority one. It obscures (or de-centralises) the figure of the author, and may leave the reader or player feeling overly self-conscious about their role. But it is a view which best describes, to my mind, the way both games and poems aspire to a state of alive-ness, of volatility, of being riddled with secrets. I am not sure I would be interested in either if I didn’t regard them in this way.

Starting in the mid-2000s, my long-term collaborator Kirsten Irving and I experimented with a series of projects that were designed to bridge the gap. First, we published Dr Fulminare’s Bard Games, a mini-zine of poems which borrowed the rules of board games as the basis for their formal structure. Later, we embraced the idea of poems that played into or on digital games by using or alluding to their content. We invited submissions of such poems for two anthologies: Coin Opera and its much larger, crowd-funded sequel, Coin Opera 2: Fulminare’s Revenge, the latter of which included work by some of the most prominent UK poets of our generation. 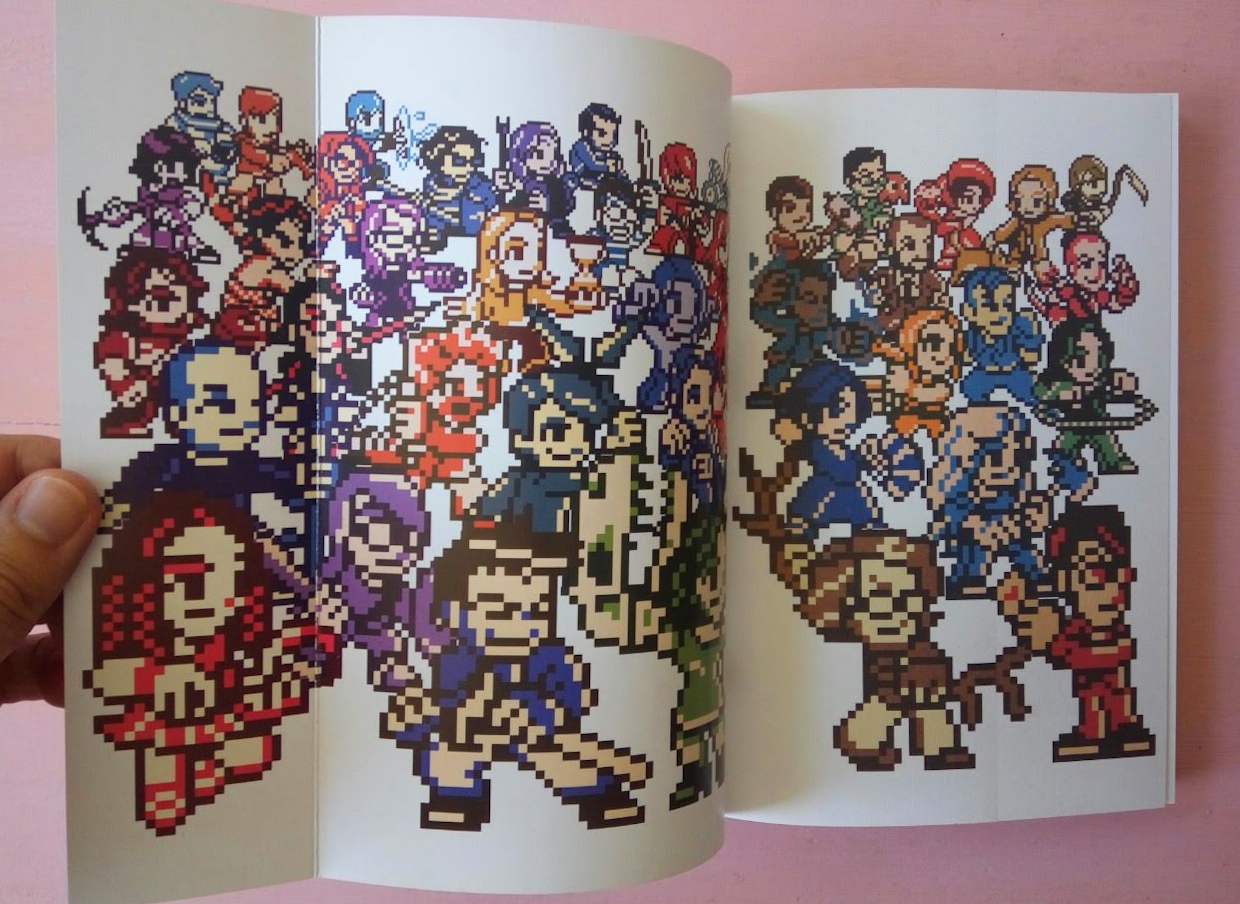 Contributing poets to Coin Opera 2, pictured on the inside cover as sprites.

(As a bonus booklet for early purchasers, I also wrote, designed and printed Super Treasure Arcade, a set of micro-poems, each based on a single game released in a particular year, starting from 1971.)

These experiments operated on the basis that re-using material from games in literary works established a system of exchange, and a kinship. I was still struggling to put my finger on exactly what this meant when I spoke about the subject briefly in an interview with Georgia Mann on BBC Radio 4 in 2016:

More substantially, by then we had begun to attempt to mimic the emergent quality of games (that is, the sense that events are unfolding live and unscripted before your eyes) by coming up with two-player collaborative-competitive poems, and by implementing crude procedural generation. Another pamphlet, Core Samples, used javascript to randomise the content of poems in the same way virtual terrain is generated in a game like Minecraft, while an earlier experiment, Pantoum, retrod the ground of Raymond Queneau’s Cent mille milliards de poÃ¨mes, but as a digital text.

The question that eventually came to the foreground was: when does a reader become a player?

Loss PequeÃ±o Glazier describes the process of poetry’s expansion into digital-interactive space as extending “the physicality of reading”. That is to say, it is an experiential augmentation; readers become physically involved in shaping and moving through the poem, beyond the point of holding a book and turning the page. We began dabbling in this area by creating digital versions of ordinary print poems broken up into stages, including Doomdark’s Revenge by Kate Potts, which we had previously published in Coin Opera 2.

This was released as part of a series of ‘play-poems’ produced in Twine, an online tool for writing interactive texts. We played around with slide presentation software to similar effect; this fusion of two of my own poems, Meat and Mustard, uses a free CSS resource called impress.js. (Meat in particular seemed to lend itself to interactive adaptation, since each line has within it a hidden word).

As I embarked on a four-year PhD research project focussing on poem-game interplay, I began to formulate a theory of ludicity that centered on responsibility; that is, a game implicates a player in the process, rather than merely enabling them. What happens is, in some way, your fault, and reflects on you. One of our play-poem constructions, Shag versus Cormorant, had previously strayed into this territory by rewarding the reader with one of two different poems (and an accompanying illustration) depending on their responses to a range of questions.

Simple roleplay in Shag versus Cormorant.

The term ‘ludokinetic poem’ suggested itself to me when, as part of my research, I found it necessary to distinguish this type of interactive poem from one that gave the reader no role to play, no integrated persona. The key characteristic was not reader agency, but whether or not the poem recognised the reader as a participant.

One of the works I developed to use as an example was Dice Cave, a metaphysical undersea wreck-diving poem that drew inspiration from both Colossal Cave Adventure (1976), one of the first text adventure games and the precursor to the modern adventure game genre, and MallarmÃ©âs Un coup de dÃ©s jamais nâabolira le hasard (A Roll of the Dice Will Never Abolish Chance) (1897), an early modernist poem which anticipated free verse and concrete poetry. Dicecave has no end point, and its beginning stanza is randomised; there is a secret message to uncover, but otherwise the poem only permits the reader to move from area to area via flickering portals.

A ludokinetic poem is literature first and foremost. But a poem-game hybrid might equally be a game first and foremost. ‘Poetry games’, as I envisage them, incorporate poetry as a major building block in the game-world – not necessarily as a directly interactive element, but certainly as a principle component of the game’s internal system of meaning. At the current stage, I have only made very minor forays into this territory.

Short clip from Erratum, a work in progress.

As an example, ‘The Lookout’, performed in the video below by Guy Clark, was inspired by, and generated out of, the experience of playing as a thief in the 2014 game Monaco: What’s Yours is Mine, substantially changing the character and the setting in the process.

Liam Murray and John Maher, for example, write compellingly on the devaluation of fantasy in digital game properties, where it is often divorced from its political and psychological function and offered as pure escapism. Games are simplistically viewed, by vocal sections of both fans and critics, as glorious nonsense, free of application to the real world.

At the same time, mainstream literary culture sidelines – or side-eyes, perhaps, more accurately – fantasy and play, deeming it a distraction from the serious pursuit of truth. Murray and Maher have an apt term for that property of games and other popular media which makes traditional critics queasy: âscurrility ... that which is demeaned, impoverished, hidden, secret and guilty.â

This is an unfortunate state of affairs. These two realms – that of making sense, and of exciting the senses – are inevitably interwoven. Moreover, serious literature’s retreat from fantasy leaves a vast imaginative realm to be plundered by only commercial and hobbyist interests. Both would be better served by traffic between them. Instead, the pass is sealed from both ends, the trail unworn.

I therefore aim to make the case for ludokinetic poetry, and other forms of game-poem hybridity, as an opportunity for growth in both mediums. There is great potential for a doubling up of the power each has to summon us to reach outward, to reorientate ourselves, to make ourselves pliant and nimble – able to escape the constrictions of place and identity that are imposed upon us.