On Toys
(An introduction)

Why do I call my website âVarious Toys, Some Transformingâ? Or, to put it another way, why do I like to think of poems and books â certainly those that Iâve been involved in making, but others too â as toys? Doesnât this diminish them? Does it mean I donât take them seriously?

Iâd say if anything, Iâm overserious when it comes to writing. Sometimes it seems that everything else in my life is a cover story, that I have a mission (the purpose of which is kept secret even from me) that may only be advanced by continuing to write. To wield language is to wield a kind of volatile power, with all the attendant responsibilities. I take it very seriously.

No, it has more to do with what Iâm against. What Iâm up against, even. I do not care for the way art and writing is framed as a contest, from which emerges a class of leader â the artist as moral instructor, priest or godling. No one would admit to thinking of art in this way, but then off we go, many of us, looking for people to turn into idols, making altars of our favourite books, falling very easily into leader-and-follower configurations.

I’m not keen either on art or writing as a method of convening tribes. Community? Sure thing – community is important! But where this, in practice, means becoming beholden to a professional network, or to a shady coterie, or where it means territorial jostling between different political and ideological assemblies – in short, wherever allegiance is the driving force – I get a bad itch.

Because of these discomforts, Iâve found myself drawn to hybridity (things that are not quite one thing or the other), sequencing (interconnected sets of things), and collaboration (things that emerge in conversation with others). These are compositional methods that meddle, in different ways, with the clean division that is held to exist between author and reader, one work and another, one type of work and another. They make everything messier, more open, less regimented.

What I have in mind when I think of toys, then, is distributed authority, enmeshment, and exchange. To conceive of a literary work as a plaything is to conceive of it first and foremost as a site of activity and autonomy â something which exists for both author and reader to test and turn over, collect and calibrate, modify and personalise. The reader does not merely receive direction from the author, is not expected to assume a position of deference.

And because I donât, therefore, in my role as writer, adopt the prerogative of an overseer or subject of interest, I hand over much of what I write to a sprawling tangle of characters and part-formed voices. I use, or point toward, writing that isnât my own. I experiment with game-like structures and come up with ideas that require (or leave room for) other writers to participate. Iâm happiest in the midst of both escaping and infiltrating established genres and forms.

You see, a toy is not really a trivial thing â or doesnât have to be. It can be a means by which we explore and uncover pieces of ourselves. A tool we havenât yet found a use for. It can be a harmless-looking container for a key or other subtle device, or an object of talismanic or oracular power to its owner. It can be the means by which we find our way into the party, or out to the garden-gone-wild. And this, more than a lesson, proclamation or witness statement, is something I think it worth my while to make and offer, if Iâm able. 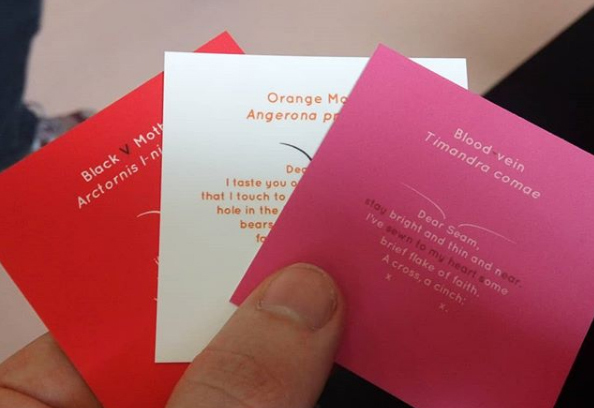 Paper Light Trap is an in-progress project â 1:1 scale calligrams of moths written in monosyllables, and envisioned as spy messages. I also use them as business cards. 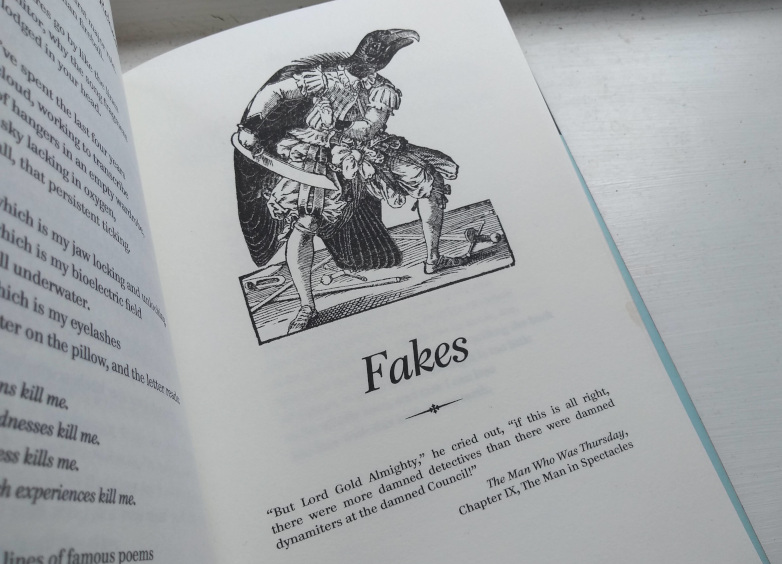 The ‘Fakes’ section of School of Forgery, headed up by my collaged interpretation of Joe the Condor, concerns itself with counterfeits and approximations.